We are still open for business online. You can browse our up-to-date stock list and contact us online from the comfort of your home.

Make an Enquiry
<<< Go Back 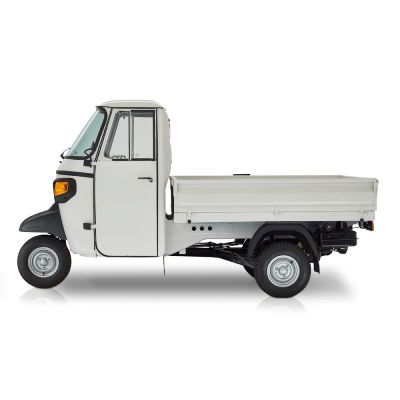 The vehicles comes in various configurations such as vans and pickups for load carrying (was popular with postal administration in some countries) and autorickshaw (Tuk-tuk) for human transportation. More recently Piaggio have made lifestyle models such as the Ape Cross Country and the Ape Web aimed at the young.

The Ape is also commonly used as a promotion tool. Advertising hoardings marketing companies are mounted in the load bay. The Ape's unusual looks can help draw attention to a brand or business. The Ape is a common sight in Italy where its compact size allows it to navigate narrow city streets and park virtually anywhere. It's also often seen at the roadside where the load area is used as an impromptu market stall by farmers. The Ape is produced in India by Piaggio India, and a similar vehicle is manufactured by Bajaj Auto. In India the Ape is most commonly found in the form of an autorickshaw or (tuk-tuk). Nowadays 2 model ranges are offered- The "Ape 50" with a 49.8cc Petrol Engine and the larger "Ape TM" which comes available with a 218cc Petrol engine or a 422cc Diesel engine. The "Ape 50" can carry 170 kg while the "TM" can carry 700 kg. A limited edition named the Calessino was made available this had retro styling and came in an autorickshaw body. The bodywork was close to the Ape of the 1950s and 1960s and was designed to evoke memories of the era of dramatic economic growth in Italy known as La Dolce Vita.